Let’s discuss a Modern Day Otomo. In an Aikido dojo, you may hear different terminology identifying a certain student, instructor, or group of aikidoka. Such as Uchideshi, Sotodeshi, Kenshusei, Sempai, & Otomo.

Otomo is a Japanese tradition among martial arts masters. It is very often confused with Uchideshi (private disciple) because it is often one of the Uchideshi who performs Otomo. Otomo is usually considered as a training method for Uchideshi. It is to take care of the master just like a servant. While times have changed from the early days of Aikido to today, some of this has been lost while other parts embraced. I remember hearing stories when the late Tamura Shihan would travel with O’Sensei has his otomo.  In 2004 the United States Aikido Federation Summer Camp featuring Doshu, a yudansha from Hombu dojo accompanied him as otomo. Then again, when his son Waka Sensei (Hombu Dojo Cho) arrived a few years ago.

My tomodachi & fellow instructor, Reuven Lirov, 4th Dan, Shidoin, says, “Being Otomo for my teacher is a lot like being a personal assistant, but a lot of what you are expected to do is expected without it being expressed. In other words, the teacher is free to think about what’s ahead of them while you are focused on making sure they have everything they need, ideally without them asking for it. Stickles Sensei would often take me to the New York Aikikai with him as his Otomo, something he would also do with students he trusted and respected when he was teaching his weekly class. First and foremost, you were expected to make sure that your teacher has all of their tools, like their weapons, and that all of these items arrive at the dojo and are readily available for them throughout the trip. During class, you were often used as the primary uke and Stickles Sensei expected me to be training with the biggest and roughest folks on the mat. This is in stark contrast to being deshi at home where I was expected to spend most of my time helping the newer students and studying the basics.
An extension of this experience, though technically more of an Otomo-adjacent experience, would be when a guest instructor came without their own Otomo and I was expected to fill this role for the duration of their visit. In this case, the expectations are the same, but I had the creature comforts of my home dojo. In the end, it was a great way to experience travel with your teacher, learn more about their expectations, and how best to assist them in meeting their goals in teaching Aikido. It also gave me tremendous one-on-one time with Stickles Sensei to learn about how he built such a successful Dojo, learn from his successes and his mistakes, and whatever other wisdom he shared, based on his experience – this wisdom was invaluable and greatly influenced the man I am today.”

My journey started over 20 years ago when I enrolled at Aikido of Charlotte as a Sotodeshi on Day 1. I started attending seminars right away (3 weeks into my start) & became Main Sensei’s Otomo. I wasn’t asked, I just did it & learned how to do that role. I was his primary uke in class & at seminars when he taught. I carried his dogi bag and held the door when entering dojos always. I was by his side if he needed anything & basically sat & listened to him speak to seniors. I didn’t talk at all. I just listened. It was during this time that I started forming relationships with all the very seniors you know of (McGinnis Shihan, Kennedy Shihan, Demko Shihan, & many more) And of course, Yamada Sensei was paying a lot of attention to me because I was at EVERY seminar training hard, then at 2nd Kyu, I became an instructor & had opportunities to teach on Sundays. Many years later, I became a certified instructor at 2nd Dan. And in 2004, I took over as Dojo Cho & then ultimately as Chief Instructor in 2021 upon my teacher’s passing.

Truth be told. When I joined, from Day 1, I knew I wanted to become a black belt & eventually teach but was extremely interested in all aspects of Aikido. I trained 7 days a week for my first 3 years I had no thoughts about ever running the dojo or becoming the Chief Instructor.

But the early days of being Otomo were where the biggest rewards in my Aikido journey occurred. Strong friendships & relationships grew from that service. And I truly felt my calling was to serve my teacher.

And when we host his teacher, Andy Demko Shihan of the USAF Technical Committee, I had the honor of the privilege of being Otomo for him.  Arranging his air travel, and picking him up at the airport.  Hosting him in my home.  Cooking for him.  Washing his Dogi. Making sure he was taken care of at all times. And he appreciates it. He tells me. It’s an opportunity for him to not only come in and teach a seminar where we can learn from his 55+ years of Aikido but it’s an opportunity to spend time with him off the mat, serving and continuing to build that friendship & mentorship.

As we look to future generations of servant-leadership in our dojos, I see fewer & fewer students wanting the Otomo role. Really for a variety of reasons, different generations, different training goals, etc.

But I truly believe if you’ve 100% committed to Aikido for the rest of your life this is the highest form of being a student to your teacher. One to not take for granted & one your teacher will never look at you the same. And that is a good thing. 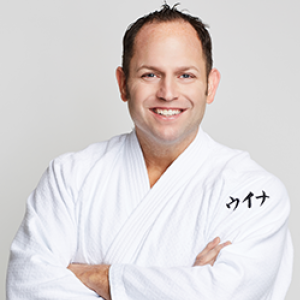 One of the internal questions I ask myself weekly is how do I keep my students engaged in Aikido? First, it’s probably important to classify what Aikido is and what it means to people.  Some may call it a hobby. Well by definition, Hobby means, “an activity done regularly in one’s leisure time for pleasure.”…